Looking for advice on what to do about iPhone battery

I have an iPhone 10s, and live outside the United States. The phone is 3 years old and the battery was depleted. I was getting at most an hour out of what was left on the battery.

I had AppleCare on the phone and the battery replacement would have been free. Apple has no owned stores, only Authorized Dealers who sell new Apple product and provide AppleCare service.

I visited both (with an appointment) only to discover that they did not stock replacement parts, including not stocking batteries. If I wanted my battery replaced, I needed to leave the phone for from 7 to 10 days, while they ordered the part from the United States and then did the work.

I have owned iPhones going back to the 3G and have done battery replacements both with AppleCare and with independent service providers and there has never been a problem.

Until now. Apple has apparently locked the battery to the phone and only an Apple Authorized Service Provider can install a new Apple battery. Anyone else doing the work, even using an Apple brand battery from a different iPhone will prevent the Battery Software in my iPhone from working. The phone will work, but anything that is provided by iOS relating to the battery no longer works. Even putting the original almost dead battery back in the phone will never turn off the Apple Warning about using a non-genuine Apple Battery installed by an non Apple Authorized provider.

You can read more about “Right To Service” here: 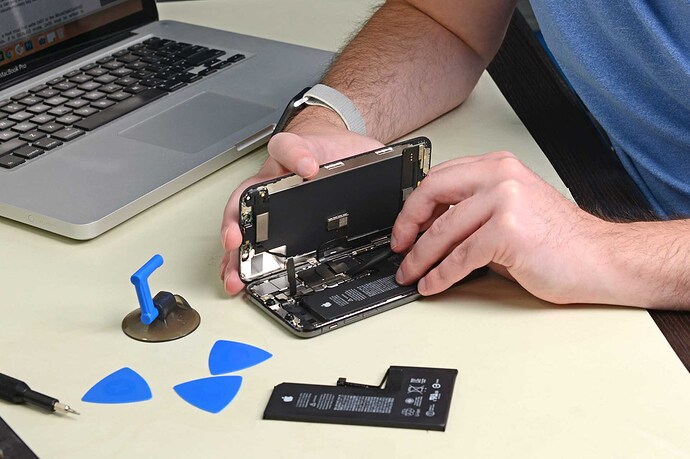 By activating a software lock on newer iPhones, Apple is announcing a drastic new policy: only Apple batteries go in iPhones, and only they can install them.

Since I could not be without my phone for 7 to 10 days, I located a facility that claimed to be an Apple Authorized Post Warranty Service Provider, giving them access to Apple parts and procedures. They were lying to me. They installed a battery, full charge exceed design maximum, but it had 65 recharge cycles on it. My guess is the battery was removed from someone’s stolen iPhone. Or do they cycle a new battery 50+ times in the factory?

That means I cannot see the manufacturer of the battery, the date it was made, or its serial number. Coconut Battery will, if the phone is connected to my MacBook Pro, provide the cycle count and the charging data.

Still checking to see what the third-party iPhone Battery App does. At the moment it is calibrating the battery which takes 90 minutes.

Here is my concern: I can live with the horrible stuff Apple did to cripple my iOS Battery App. I think it is disgusting that Apple did this, and I can try to message my representatives in D.C. to support “Right To Service” laws. The notifications and messages I am receiving that I am not using a genuine Apple battery will go away in 14 days. The new battery, whatever brand it may be, seems to be working fine.

But my AppleCare warranty is now void. If something else goes wrong with the phone, I have no coverage. And I am paying for theft and accidental loss because now Apple allows users to buy additional AppleCare monthly after the original AppleCare that I purchased when I bought the phone expires.

I am looking for solutions. When I get back to the U.S. I can plead my case at an Apple Store. They are permitted to remove the existing battery and install a genuine Apple battery and using tools only they have, make my iOS battery software functional again.They will charge me for this, at least $100, but that will make my AppleCare legitimate again.

I can buy a new iPhone 12, with AppleCare, keep the 10s Max as a backup, and remove the AppleCare from it. If it breaks, gets lost or stolen, I am SOL. The phone is maybe worth $500 in trade for the 12, but Apple may not accept it in trade due to the non-genuine Apple battery.

Besides writing to Tim Cook, what would you all suggest I do? Please no comments on my gullibility for believing that the facility I choose was Apple Authorized. They didn’t speak English and I don’t speak perfect Spanish. Apple is signing up repair facilities to be Apple Authorized and give them access to Apple technician training, parts, tools, and repair software. So, it is plausible that this shop was Apple Authorized. They did good work, not exactly cheap. I paid the foreigner price of $92 to install some brand of battery that lights up my notifications as non-genuine.

I am sure this shop would be a good choice for any work on older Apple products that don’t have the Tim Cook Time Bomb built into the firmware.

I think it might be a good idea to start by contacting Apple’s EU headquarters in Ireland. My guess is that they would be very interested in hearing about shoddy repair shops presenting themselves as authorized service providers in their jurisdiction. They can point you to an actual Apple sanctioned repair shop in your local area, and they will probably refer you to the right Apple support people to speak to in Spain.

Batteries can turn out to be explosive devices. Remember all the severe fire and blast injuries inflicted on unsuspecting victims who bought top of the line Samsung phones just a few years ago, and they didn’t even crack the cases on them? The unprecedented move by the South Korean electronics giant is an embarrassing reversal for a respected global brand.

Whether or not someone agrees with Apple and right to repair, messing around with iPhone batteries can have dangerous consequences. At first glance, iFixit doesn’t seem to mention anything about toxic and flammable materials in iPhone batteries. It sounds like they just want to sell kits.

I was wondering why he did not go to one of the Spanish Apple Stores, then I realized that he is probably not in Spain

7-10 days for repair is unacceptable, I fully get your reaction.

In another case like this, what may be helpful to know is that Apple’s return policies are really very good. You can buy a brand new iPhone (or iPad or Mac for that matter), use it to its full extent as long as you, no later than on day 14 after your purchase, tell Apple (online or phone) that you want to return it. From then on you have ample time to return it (up to 28 days? I’m not quite sure). Once they get it back (shipped or dropped off at store) you will get a full refund within few days to the card used for purchase. No questions asked. The only thing that would mess that up is damage to the device. So you can buy a replacement for the device that needs to be repaired that will tide you over until you finally get your device back after which you return the purchase. It’s essentially free 14-day rental. Only added work is the sync/restore to the new device and back.

Obviously, that’s no good now but maybe it’s helpful for somebody else or another time.

From your description it sounds like otherwise this device is still A-OK and perfectly useful to you. So I’d feel that right now you have hardly a choice but to bring it to Apple next chance you get and have a proper battery put in. You don’t want to just throw away a working iPhone with AppleCare. OTOH you probably don’t want to sell it off this way either, because you can’t fool a buyer about this (and even if you could, you shouldn’t). And if you sell it this way acknowledging the issue, you’ll likely take a massive hit on price. If you do invest into a new battery and the 13 comes around in three months making you crave an upgrade you’ll at least have a device you can trade in or sell to somebody else at its full value.

You also indeed could just buy a new 12, remove the AC on this device, and keep it as a backup. But in my experience old iPhones just aren’t really that valuable as “backup” (and I believe @ace has even written to that extent lately). Plus it seems like quite a lot of value that you’ll essentially be just throwing out. Even compared to perhaps $100 battery cost.

The OP story brought back memories of my experience in Spain. I moved to Spain in 2002, and a few months after my arrival, my 6-month-old Titanium Powerbook display went black. It had AppleCare on it, so I took it to the only store in my area that sold Macs (Apple didn’t own any stores in Spain in 2002). They pointed out that my AppleCare worked only in America, where the Powerbook was purchased, not in Spain. Fortunately, I was still within my one-year warranty, so they shipped the TiBook to Netherlands for repair. I was told that Apple wouldn’t authorize anyone in Spain to fix Apple products, so they had to ship them to Netherlands (which I guess was more trustworthy)!

And yes, there are now Apple Stores in Spain.