My old “media” iMac is still running Mojave and works well as a Homesharing server using iTunes. I mostly use the Computers app on an Apple TV to listen to music.
However I also wanted to be able to use Homepod Siri to play some custom tracks (actually to mask tinnitus) on a Homepod Mini. So I (stupidly) selected to sync with my iCloud music libary. That sort-of worked for the custom tracks but… now all of my iTunes playlists have vanished on the Apple TV. I can only see playlists that have been added to the iCloud library via Apple Music.
There doesn’t seem to be a way to see and select those playlists via Homesharing/Computers anymore. I was aware that syncing involved converting some songs to ACC and thought this might prevent some playlists appearing but many are already fully compatible so that doesn’t explain the problem.
Years ago I remember people complaining about this issue but overlooked this when I chose to sync my music. Grrr! 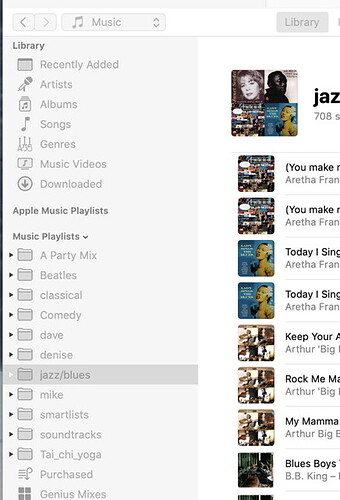 “Apple Music Playlists” was added to the sidebar after syncing (the lists are hidden in the above snapshot). None of the “Music Playlists” are available via Homesharing anymore.
Is there a way to fix this?

This might have resolved itself - just took a day or so for the “sync” to complete. I will check if all playlists are available.