I’ll just point out that as I as the customer and user am not presented with an option to delete that information. How is that justifiable at all?

From what I can see, it’s not in a form that most people, even technical people like us, would even try to read or understand.

I’ll just point out that as I as the customer and user am not presented with an option to delete that information.

Do a Force-Restart and they get deleted.

Apple started foisting analytics on the Podcasts app for listenership measurement with no means of opting out, only clearing the identifier used, manually, to reset the collection for a given account. It’s deeply unseemly, but I don’t think it’s more than that. But I do hope there are consequences for this sort of double standard.

In addition to podcasts, the vast majority of broadcast, print and digital media, as well as gaming, restaurants, cinemas, theaters, radio, television, books and magazines, games, etc., etc., just about every flavor and size of content creators use analytics to determine what audiences like and respond to. And if applicable, who will pay for what.

A podcast is just an audio file, referenced from another file, a feed. Both are stored on a web server somewhere. It takes one request (usually on a regular interval) to update the feed, and further requests (usually one, for an offline download, but it could be range requests for streaming purposes) to fetch the audio file. That’s it. There’s not much scope for analytics there. And, there is a broader question, even above and beyond the principle one of whether any person should be co-opted into sending analytics, namely, whether knowing more about your audience actually makes your podcast better, or subjects it to mere commercial pressures that ultimately hurt podcasting. IMO, it’s simple: podcast apps should do what podcast apps have to do to support the listener to listen, and that’s it. 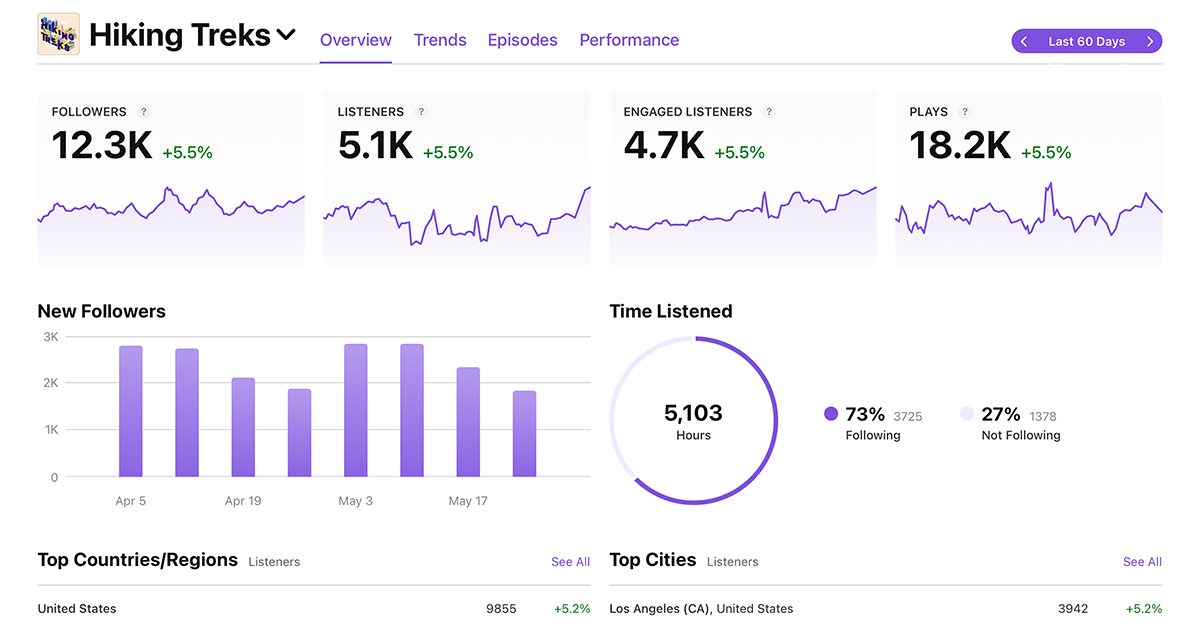 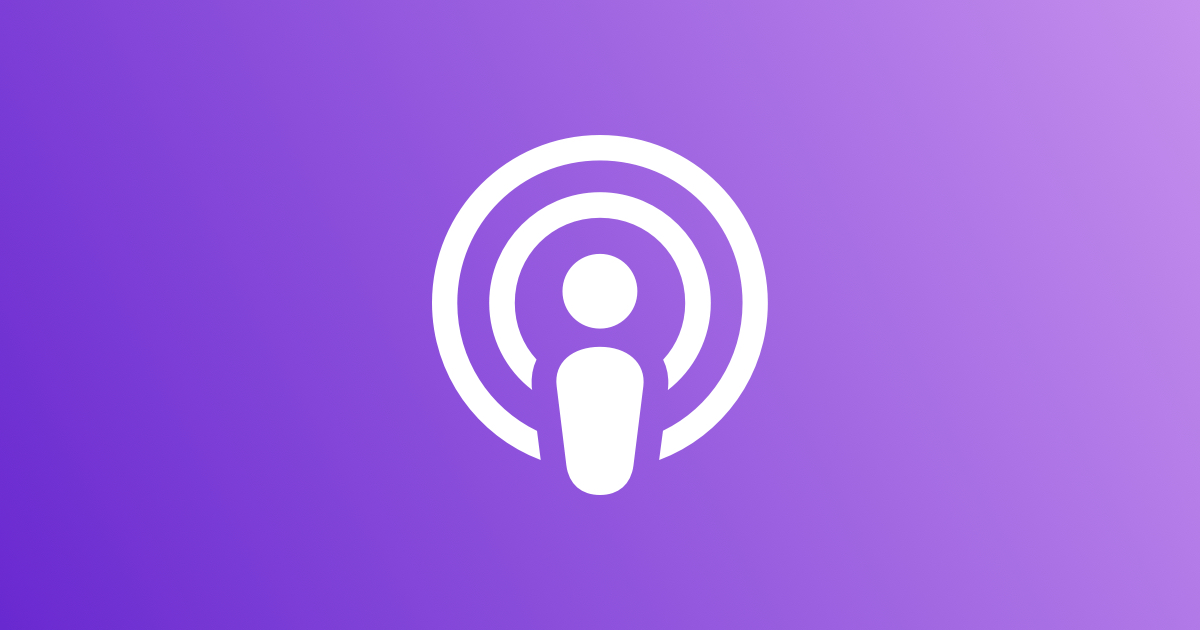 Ensure that Analytics data is available to you by following these best practices for episode metadata.

Use Analytics to gain a better understanding of how users are listening to your shows and episodes on Apple Podcasts.

Learn more about show analytics and what do if your show isn’t visible in the Analytics dashboard.

Learn about the roles and permissions available in Apple Podcasts Connect to help your team manage your podcast, view analytics, and track sales and payments.

Learn about requirements for collecting Apple Podcasts listening data and the minimum thresholds for aggregating data. 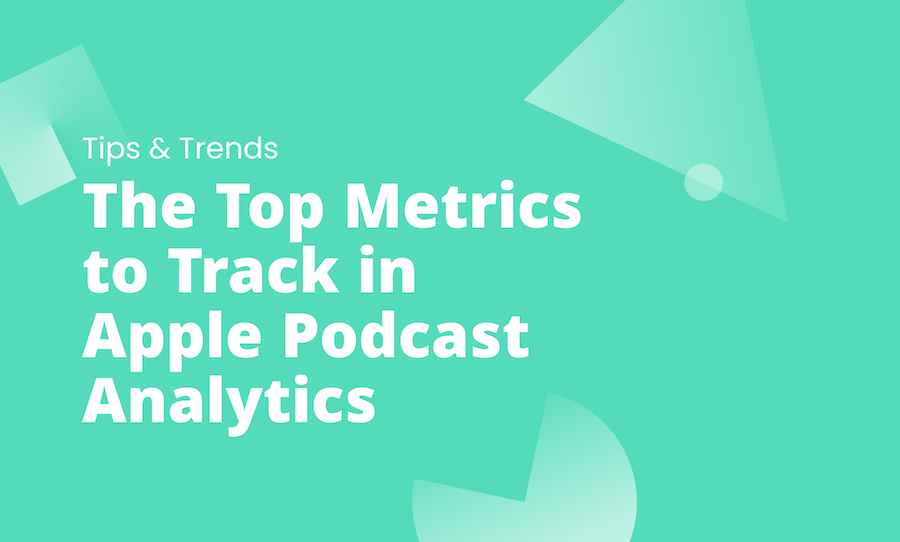 The Top Metrics to Track in Apple Podcast Analytics

Currently one of the most popular listening apps, explore how to track your podcast analytics within Apple Podcasts.

Podcast analytics and attribution for publishers & advertisers. Plus podcast charts from Apple Podcasts and Spotify around the world, and an amazing Podcast API, and tools for publishers to grow their shows. 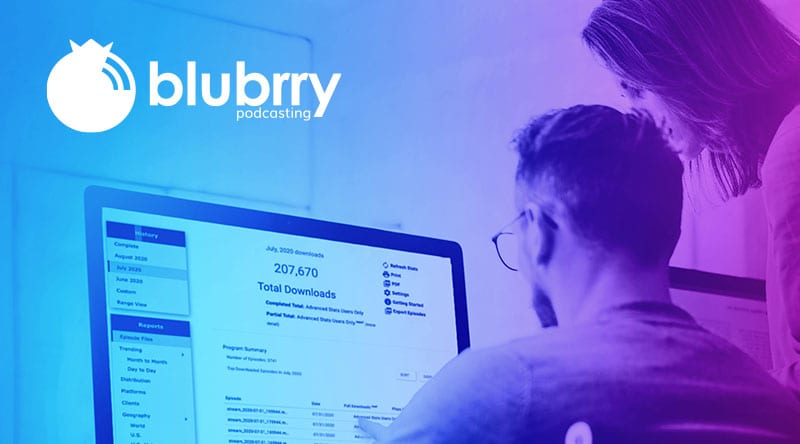 From total plays, listener demographics, to application & device data, Blubrry makes it easy to measure your podcast performance and growth.

Tutorials on podcasting: learn how downloads are counted, how to record a remote guest, etc.

Apple Podcasts Analytics: How to Find & Use These Podcast Statistics

Apple's Podcast Analytics helps you understand how people are consuming your podcast episodes and what you can do to improve future episodes. These insights aren't available anywhere else and can help you learn a ton about your podcast. 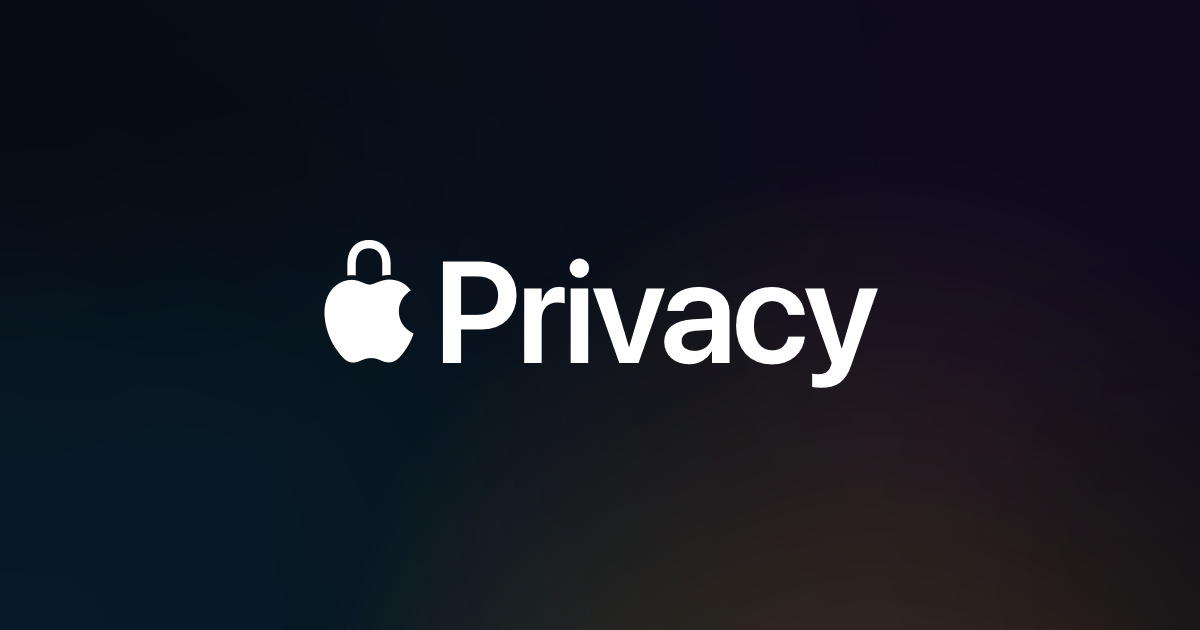 I’d like to see someone in the main Mac media arena talk about this a bit more – it’s concerning if true (whatever reasons we might come up with, it’s not good that Apple is saying one thing and doing another).

I share that concern. I get this bad feeling that nobody wants to talk about this, as if when it comes to privacy Apple could do no wrong.

Although a veteran Mac addict (since 1985, about a year after it first appeared, if I remember correctly)… I also like both Windows and Linux, in various ways. I once even bought a consumer version of Windows 7 to install in VMware Fusion on my Mac, and ran both. And I even taught Microsoft Word in corporate seminars (although I much preferred teaching Mac-based computer graphics stuff).

In the early days, as a graphic artist I chose Mac simply because that was the platform that supported most programs I used. But now almost all the graphics apps I care about exist on both Mac and Windows. And Windows machines are generally cheaper.

The number one reason I haven’t touched Windows in years: the frequent reports online about Microsoft’s telemetry (their sending lots of your data to the mother ship, i.e. MS, in the background on an ongoing basis, even for non-MS processes you run). From what I’ve read, for the recent consumer versions of Windows, the telemetry is difficult to turn off and impossible to keep off: MS turns the telemetry back on with every forced system update (and you can’t disable the updates). Disclaimer: I have no personal experience with any of this, it’s just frequent reports online.

What’s my point? My number one reason for staying with Apple (Mac and iPhone), despite the added cost and smaller community, is privacy. That’s why this topic that I started in this thread is so important and concerning to me. I appreciate the attention you’re all devoting to it, but I confess I’m still not clear on what the reality is here.

And I doubt I’m the only customer, or potential customer, for whom privacy and security are major issues.

Sorry for all the long wordiness. It’s one of the side-effects of being a very fast typist, I guess!

It’s not immediately obvious that collection of anonymised data has any impact on privacy. But that discussion in any event begs the question: is Apple in fact doing what it is alleged it is doing?

Let’s check the bona fides of those making the allegations. Then we can justifiably approach Apple. There’s still been zero backup/correlation of these two guys in the garage by anybody who can be acknowledged as expert in the field. That’s the real question being begged, in my opinion.

That’s rather what I meant. I’m not interested in the bona fides of the accusers, though; all that interests me is whether or not they’re right. And, as you observe, there isn’t a lot of objective support for it.

It’s not just about whether or not Apple can do no wrong. It’s also about how they stand up to the competition. And more importantly, about the reliability of the data that was collected in this circumstance.

Absolutely – which is why it’s important to figure out what’s actually going on so we can make that comparison effectively.

It’s not immediately obvious that collection of anonymised data has any impact on privacy.

De-anonymization is very much a thing:

What Information is "Personally Identifiable"?

Mr. X lives in ZIP code 02138 and was born July 31, 1945. These facts about him were included in an anonymized medical record released to the public. Sounds like Mr. X is pretty anonymous, right? Not if you're Latanya Sweeney, a Carnegie Mellon...

Any collection of data is at risk for being leaked, stolen, breached, or having its release compelled by any government within whose jurisdiction the holder of the data does business.

That EFF article is from over a decade ago—what’s the current status of what data is considered “anonymous”?

Personally, I can’t recall a time in my adult life that I would have considered a full birthdate “anonymous” to any degree. The combination of name and birthdate is the standard in the medical industry for verifying a patient’s identity—neither of those two pieces of information belong in anonymized data. That combination is sufficiently unique that I’ve literally encountered a duplication (two different people with same full name and birthdate) only once in my entire career. (And let me tell you, it was a mess to clean up when the conflation of their accounts was discovered at the pharmacy I was working for at the time. It took a full-time data tech most of a week to sort out what data belonged to which patient, both of whom lived in the same state and had patient histories going back about ten years.)

That’s beside the point. I want my medical provider to have my name and DOB. That’s my data and it’s my choice to give it to them so it’s all good. But Apple? Nope. IMHO they need as little as possible from me. So when they ask me if I’m OK with them collecting my personal data, I say no. Yet then I still see them amassing it. Not what I asked them to do, so no, not OK.

So when they [Apple] ask me if I’m OK with them collecting my personal data, I say no. Yet then I still see them amassing it.

In general what sort of personal data are they collecting? From where are they getting it? How did you figure this out? 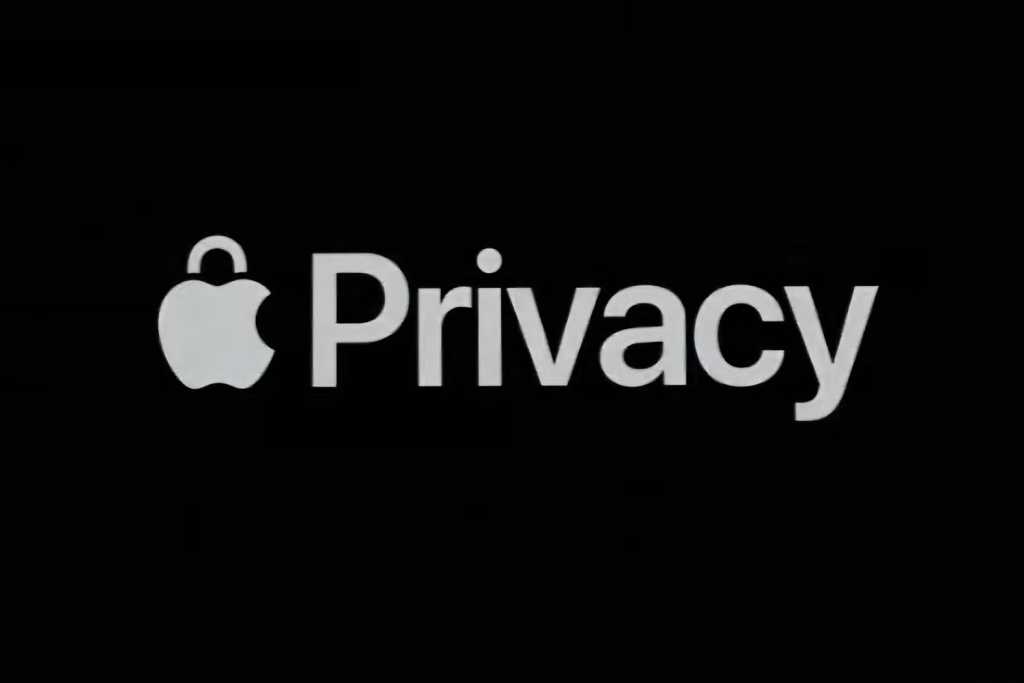 How Apple collects data about you and protects your privacy 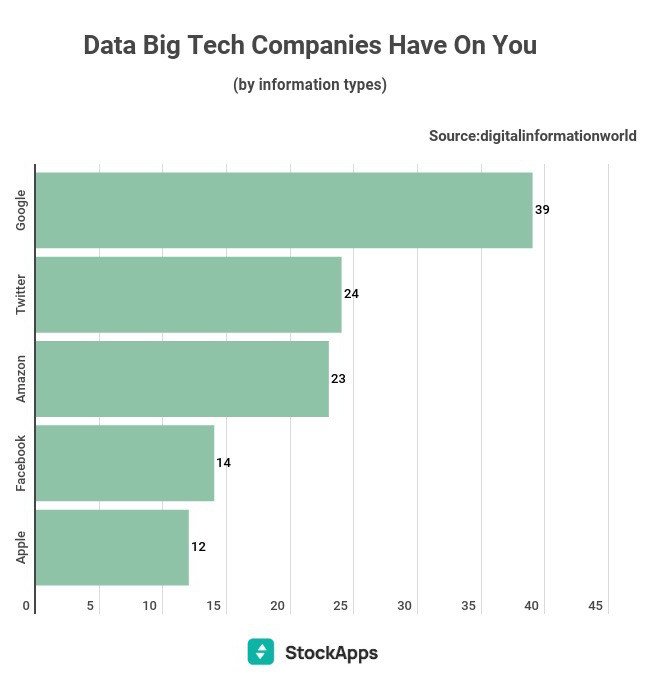 Thanks, but my questions are within the context of the original poster’s postulation that Apple is deliberately violating its own guidelines with respect to personal information (i.e., getting and selling it after the user specifically opts out in accordance with Apple’s apps). Some amount of private disclosure is pretty much assumed (name, address, credit card number, etc.) but I’m really curious about Simon’s flat out asserting that Apple is actively engaged in collecting their data–I follow Simon’s postings pretty closely but don’t recall them making this definitive a statement in this area before.

Simon is a very smart, knowledgeable, generous and helpful contributor to this list. But I have yet to see him or anyone else come up with specific examples of Apple violating its own privacy policy. But I do keep reading about how Apple has strengthened its privacy controls:

iOS 15.2—How To Use Apple’s Brilliant New iPhone Privacy Feature

iOS 15.2 is finally here, along with a brilliant new iPhone privacy feature. Here's how to use it now.