[I suspect this is a gripe to which commiseration is the only response but if there is a solution, I’d like to know.]

I just upgraded my iPhone 7 to iOS 14 and an annoyance with iOS 13 has gotten worse. After some update to iOS 13, the layout of the sharing pane changed slightly so the name of the first Action only partially appeared on screen. Now with iOS 14, the pane has been adjusted further so virtually none of the text or icon is on-screen until you scroll. There is tappable area available without scrolling, if you know what the first Action in the list is, but it’s still annoying. In the following screenshot, the first Action that you can’t read is “1Password.” 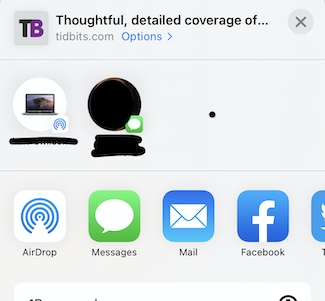 I vaguely recall some people having problems longer ago because the first Action was positioned so neatly on the screen that they didn’t realize the pane was scrollable to reveal other options. Maybe they intentionally changed the pane so the first Action isn’t entirely on-screen but they’ve gone too far. I thought this might just be a problem because I had an older phone with a smaller screen but the iPhone 7 has the same resolution as the iPhone 8 and the SE 2.