I have this old iPhone 6 Plus. I only use it in the evening to play white noise music for my dog when he’s sleeping. I replaced the battery three years ago when it bulged. I noticed this morning it seems to have started bulging again. The battery health is 100% still. And it seems to work OK. But is this the battery enlarging again? Is it dangerous? 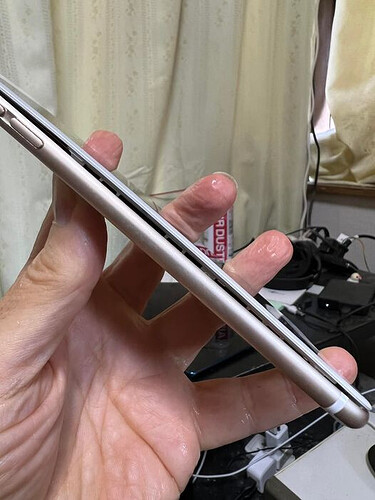 I think a bulging battery is always dangerous.

I would contact Apple to schedule a battery replacement. For an iPhone 6+, it will cost $50, which I consider a very reasonable price.

(For comparison iFixit charges $25 for an aftermarket battery. If Apple’s battery costs about the same, I would consider the $25 difference a very good price for the labor.)

I have an appointment this morning at a nearby iPhone repair shop within walking distance (much more convenient than going to an Apple shop) and at current exchange rates it will come to just $36.

Nice price, but note that an independent repair shop will probably be using an aftermarket battery.

This shouldn’t be a problem, but iOS will detect this and will block access to the Battery Health service. It will instead display a warning ”Unable to verify this iPhone has a genuine Apple battery. Health information not available for this battery”.

The battery should work and charge just fine, but you will get this warning unless the shop uses a genuine Apple battery and uses Apple’s proprietary service to pair it with the phone after installation. If this doesn’t bother you, don’t worry about it. But if it does, then you need to either go through Apple, an authorized Apple service site, or use Apple’s self-repair program (which is only valid for a small number of phone models).

I wonder if that affects the 6 Plus. The current battery itself is a replacement I did three or four years ago at the same shop and I haven’t seen warnings like that. In fact the battery health still shows 100%! Do 100% healthy batteries also start to bulge like that?

A few years ago when I noticed the bulge it was crazy bent. This time it’s a mild bending.

I wonder if that affects the 6 Plus.

That’s correct - it does not. The unable to verify is only applicable to the iPhone XS, XR and later models.

The current battery itself is a replacement I did three or four years ago at the same shop and I haven’t seen warnings like that. In fact the battery health still shows 100%! Do 100% healthy batteries also start to bulge like that?

Since it’s not a genuine battery, the battery health report should be considered unreliable.

Anyway, I had the battery replaced at the local 3rd-party iPhone repair shop. It’s part of a reliable chain here in Japan.

It was weird at first, because they tried two replacement batteries and neither would charge. They wondered if there was something wrong with the iPhone 6 Plus itself, but put my battery (which they had installed 3 or 4 years go) back in after the original Apple one started bulging a lot) and it was charging just fine.

It seems their stock, while unused, was old and apparently that in itself can cause batteries to go bad. Did you know that? I didn’t.

Anyway, they sent my iPhone over to another one of their stores which had newer batteries and installed one there and it worked fine. So I got it back the same day, just a few hours after bringing it it.

I wonder what my best strategy is going forward to keep this battery healthy. What I typically do is use the phone for about 7-8 hours at night to softly play white noise music for my dog in hopes of keeping him calm. After a night of use the battery typically drops to about 82% and I plug it in the charger and leave it that way until night again.

Is there a better way, for long term battery health, of doing this? After it’s charged should I maybe unplug it until the evening again?

Try turning off Location Services and Air Drop, which can be battery hogs, and other apps you won’t be using when you are just playing music on the iPhone. And it might be a good idea to remove any apps that you might not be using anymore.

Also try turning down brightness or turning on Dark Mode.

That iPhone just sits there and the screen is off basically 100% of the time anyway.

The battery isn’t getting hogged really. I’m just wondering how to preserve its physical life longer so it doesn’t start bulging again in a few years.

It seems their stock, while unused, was old and apparently that in itself can cause batteries to go bad. Did you know that?

Yeah, Lithium batteries definitely have a shelf life. They lose capacity over time, even if they’re never used.

Additionally, if the power stored in the battery drops below some threshold level (e.g. after sitting on a shelf for many years), the protection circuit will refuse to charge it. It is apparently dangerous to charge a completely dead lithium cell, but I don’t know why. So if you’re going to store them for a long time, you should periodically charge them (up to about 40-60%, I believe) to prevent this from happening.

I wonder what my best strategy is going forward to keep this battery healthy.

For a battery that is installed in the phone and regularly used, I think Apple’s iOS charging strategy will be good enough. If you’re using about 20% each day before charging, I wouldn’t worry about it.

Ideally, a device that is never removed from the charger should be kept at about 80%. But if iOS can’t do something like that automatically, you’re going to have a hard time doing that manually.

In general, 3-5 years is the lifespan you can expect from a phone battery, so I’d recommend to just use it normally and don’t worry about it too much.

To preserve this replacement battery you could always buy something like this:-

It seems a good solution for older phones - Apple & Android os’s now protect the phone battery by learning when you normally unplug, (Or based on a set alarm) & only charge up to 80% until close to the “unplug” time, when they finish the charging. But I don’t think this clever trick works on older phones.

If only Siri could understand dog-speak!