Has the M1 really made Intel that desperate?

I distinctly remember lots of caterwauling from indignant and outraged, fellow Mac users when Apple moved to Intel. Heck, after they were talked off the ledge, some even abandoned the Mac entirely.

Someone (or group) at Intel didn’t get their bonus over this. Oh, waa, waa, waa.

When Apple switched to PowerPC, the company wasn’t abandoning Motorola. Motorola was part of the AIM alliance that developed the processor. When Apple switched to Intel, neither IBM nor Freescale, the spin-off from Motorola, was interested in developing processors for Apple anymore, at least not without Apple forking up for more of the development costs.

For Intel, however, losing a prominent customer like Apple is a significant setback, especially when it has been struggling for a while now with getting new processors out the door.

It was because IBM and Motorola wanted out of the personal computer/chip business and put the kabosh on future development of Power PC chips. IBM bet early and big on transitioning to strategic services, cloud computing and storage. The then struggling little Apple was their last remaining RISC chip customer when all the Windows machines had “Intel Inside.” IBM sold their computer hardware business to Lenovo, who bought, and still buys, its PC chips from Intel.

B2B Marketing Communications background here. It’s never a good idea to disparage a competitor. Just mentioning the competition is dangerous. It makes you look weak and fearful. Example: If Ford says it’s better than Chevy, a prospect will look at both. The commercial was broadcast in 1983 so that “so that the advertisement qualified for the 1984 Clio Awards.” In other words, the caption for the YouTube video is incorrect.

Actually, the official title of the commercial is, and always has been, “1984.” And it was broadcast in just a few network affiliate channels in tiny designated market areas not just to qualify for the Clios; it was equally important to test the ads out in the wild. This was because the participants in the direct screening test didn’t particularly like the ad very much.

And of course 1984 first aired before Macs, a very new, very different and revolutionary product, were stocked at retail. They needed to make the public aware of the product and give them reason to want to find out why they should like it, and for retailers to pay for the merchandise and give it excellent in store positioning, and get their sales staff revved up. To directly follow up, there were major print, outdoor, direct mail, in-store, coop TV campaigns for Mac that were not as conceptual as 1984 that ran after the Super Bowl spot. And 1984 ads were on screen in cinemas in some target markets, especially those where IBM and Compaq were big sellers. And this doesn’t even count the infinite number of times the ad has been rebroadcast, streamed, discussed, rehashed and satirized.

To the best of my knowledge, everything you said is correct. I was referring to the caption at the top of the YouTube window, which said “Original Recording from The Day It First Aired” incorrectly, because that wasn’t the day it first aired.

The ad talks about PCs, not any manufacturer. Microsoft software is mentioned once and in a positive way.

Nope. Microsoft is never mentioned In 1984; a transcription of the ad’s digitally distorted voiceover is here:

Way back in 1984, services other than those built in Mac OS weren’t yet anything resembling a gleam in Steve Jobs’ eye. IBM, by far, dominated the high end consumer and business hardware market, and were considered by just about everyone to be top of the line, price and quality wise. At the time, IBM was the Goliath of the hardware industry. Apple positioned itself as David, the one everyone could relate to.

The follow up print campaigns for Macs that ran just before and long after 1984 debuted featured the benefits of Mac OS, and the Mouse was often the primary spokesmodel. They overwhelmingly featured how friendly, easy to use, uncomplicated and unique Macs were. if Apple emphasized just software, corporations, individuals, small businesses and schools would have expected it to run on other machines than Apple’s. 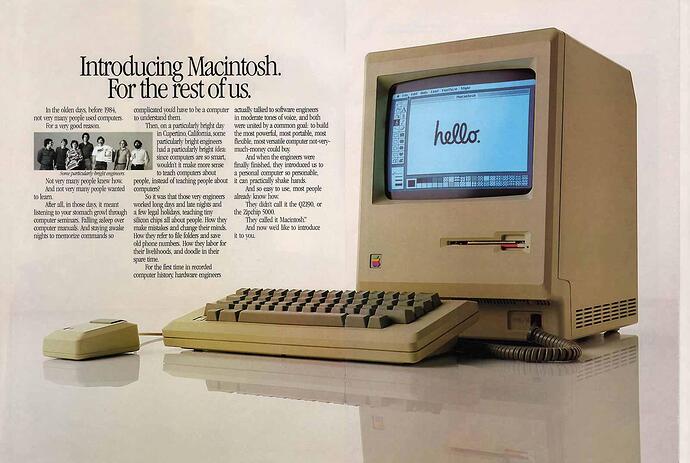 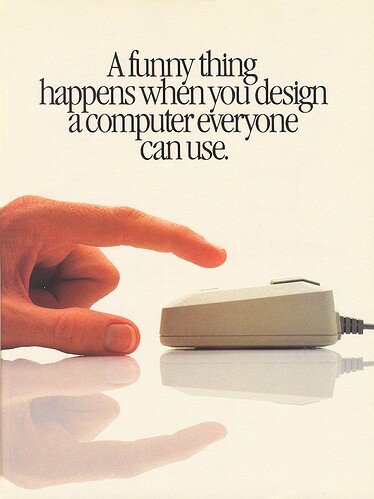 To promote the Macintosh 22 years ago, Apple purchased all—as in every—ad space in the Newsweek 1984 election issue. That was 39 pages. The folks over at Graphical User Interface Gallery (aka Guide…

My .02bits:
Intel has had a poor track record with design defects in their chips, resulting in mad scrambles to fix (and not fix) the insecurities. Apple, as well as expected, is a customer and was likely going to eliminate any issues using insecure processors. It doesn’t mean Intel will be excluded permanently, but I am sure that Apple’s One OS strategy means that it makes logical sense to have iOS and MacOS as “OS”. Apps by devs will run on all platforms, making more money for … Apple.
And the M1 is just the start. I wonder if Apple will have fab plants in the US, and not just abroad?

I wonder if Apple will have fab plants in the US, and not just abroad?

Apple doesn’t have any fab plants. They contract to TSMC for making their silicon. TSMC’s list of fabs shows 14 in Taiwan, 2 in China and one in the US. TSMC has also announced that they are building a second US fab, with production expected to begin in 2024.

I don’t know which of these fabs are used for making Apple’s chips.

I wonder if Apple will have fab plants in the US, and not just abroad?

This is unlikely to happen as things stand. Silicon is a sand that must be carefully refined down to almost nothing in weight and volume under extreme safety and sterile conditions. Most of the high quality raw silicon is mined in China. It is prohibitively expensive to ship in its raw state, and would be way more expensive to refine and manufacture in the US. And the cost of building and maintaining secure, super sterile factories along with training and paying highly skilled workers in the US is also prohibitive.

I don’t know which of these fabs are used for making Apple’s chips.

From what I understand, Apple is using the best that TSMC has to offer (5nm), and that means they are being produced in Taiwan, where TSMC’s main and most advanced production lines are. Ben Thompson has talked about this on his blog:

As the Wall Street Journal notes, the Arizona fab is quite small, relatively speaking, and while 5-nanometer chips are top-of-the-line today, they won’t be in 2024, when the fab opens. Moreover, it is worth noting that TSMC has a fab in Washington that it opened in 1998; it still operates, but TSMC didn’t make any additional investments in the U.S. until now.

The context of that article was TSMC’s announcement that it would (eventually) open a 5nm fab in Arizona; yes, that is cutting edge today, but it won’t be in 2024, when the fab opens. Still, it will almost certainly be the most advanced fab in the U.S. focused on contract manufacturing; Intel will, hopefully, have surpassed that fab’s capabilities by the time it opens.

I don’t think there is any prospect of Apple silicon being produced in the US in the near term (or medium term?), not because of the availability of refined sand, but because the need for cutting-edge manufacturing facilities that simply don’t exist.

I don’t think there is any prospect of Apple silicon being produced in the US in the near term (or medium term?), not because of the availability of refined sand, but because the need for cutting-edge manufacturing facilities that simply don’t exist.

I read all the excellent Stratechery articles, and one of the points he mentioned is a big reason why facilities in the US don’t exist:

“ A few years later, in 1987, Chang was invited home to Taiwan, and asked to put together a business plan for a new government initiative to create a semiconductor industry.”

TSMC showed the power of modularization, and now they are core to the U.S. national security strategy.

So far in the US, no matter which political party has been in control, there has been no government incentive to build manufacturing facilities here.

Access to raw materials at cost effective prices is another important piece of any manufacturing puzzle. When you think about adding everything up, there are a lot of missing puzzle pieces that would enable fabrication of chips in the US.

There is a lot of chip manufacturing in the US, it’s just that aside from Intel none of it is on the cutting edge processes. I think it is also probably for less complicated chips than the SOC designs used in computers and smartphones. Again, with the exception of Intel, which shows that there’s no reason there couldn’t be high end SOC manufacturing in the US. But no one aside from Intel has invested in it, and Intel won’t manufacture anyone else’s chips.

There’s what can be very promising new developments that would bring a lot more chip manufacturing back to the US:

“Lawmakers are proposing a number of bills aimed at bolstering U.S. technology, such as the Chips Act, which would offer incentives to bring a chip manufacturing back home, and the Endless Frontier Act to invest more broadly in technological advancement.”

Biden Putting Tech, Not Troops, at Core of U.S.-China Policy

Biden Putting Tech, Not Troops, at Center of U.S.-China Strategy

Let’s hope the bills will pass, and soon!

An interesting article related to this thread clearly sets out the current issues with chip sourcing. Pretty crazy how concentrated manufacturing is, not just by region, but in only two companies:

As much as 70% of the world’s semiconductors are manufactured by just two companies, Taiwan Semiconductor (TSMC) and Samsung.

How the world ran out of semiconductors

Intel has launched a series of new ads that feature Justin Long, the former “I’m a Mac” star from Apple’s popular ad campaign between 2006-2009. In a flip of Apple’s Mac vs. PC ads, Intel shows Long checking out various PCs and features powered by...