I’m assuming that we’ll get more advanced pro-ish Mac mini and a larger screen more pro-ish iMac soon…but in any event whatever I do will be once that more powerful hardware is available.

Currently have a 2019 iMac 27 that’s the main house file server and hosts a bunch of drives including an OWC Thunderbay Mini. Besides being the server it’s also where I do the majority of my photo processing in Lightroom since it’s got the large monitor. Also have a 2014 mini hooked up to the TV in the entertainment center. Daily drivers are an M1 Pro 14 and an M1 Air for my spouse. We travel a lot and I do photo processing on the road with my MBP but then I have to do the export/import catalog on return home to get the photos from the just completed trip into the mail catalog on the iMac. Both of the laptops backup via a home grown CCC Time Machine like series of tasks to both the mini and the iMac since Time Machine to network destinations is basically unreliable in the long term despite mucking about with it considerably.

My goal is to upgrade at least the photo processing iMac to something more powerful and perhaps upgrade the mini as well…and I hope to not buy two new computers although the budget allows that if it’s the best alternative.

Having the entire Lightroom catalog available on travel is a slight plus since with the usage of Smart Previews in LR allows me to work somewhat on older year images without having the originals available…but might be putting the photo processing on not the fastest machine in the stable if the new hardware is more powerful than the M1 Pro…but even the M1 Pro in the MBP runs rings around the Intel iMac. Backup wise there’s not really much difference as I have Backblaze for offsite as well as multiple copies of data…these are currently done via the iMac and Backblaze as well as periodic clones of the laptops to a pair of Samsung T7 SSDs.

Simplifying things also has some attractiveness…hence my alternative of doing all image processing on the MBP.

You have very clearly laid out your situation, and the pros and cons of several alternatives. I don’t have a comprehensive recommendation for you, but I would add my own experience in favor of the “simplify” option. I recently replaced an on-the-road MBA and stay-at-home iMac with a new MBP M1 Pro. It took a while for that paradigm shift to sink in, because I had been so used to the back-and-forth, this is on the cloud, that’s not, etc., of keeping the MBA and iMac in sync (or at least, keeping them from colliding). Having one computer (which as you say runs rings around the iMac, as well as the MBA) for both on the road and at home has been very nice. I added a pair of 27" monitors, a TB4 hub, and the DisplayMaid utility, so now my road/home transition is literally plugging in or unplugging one cable.

Mark German, who is a pretty reliable source about new Apple products, is predicting that There will be “massive slew of upgrades” for Macs will be unveiled the first half of this year. The first will be in March, the second in June. And it looks like there will be very alluring, super duper M2 and M1 Max chip models, probably loaded with a lot more cores.

Ming Chi Kuo is another pretty reliable source, and he’s expecting the big Apple reveal to be on March 8. He’s expecting a new MacBook Pro, a Mac Pro, and a 27” iMac. 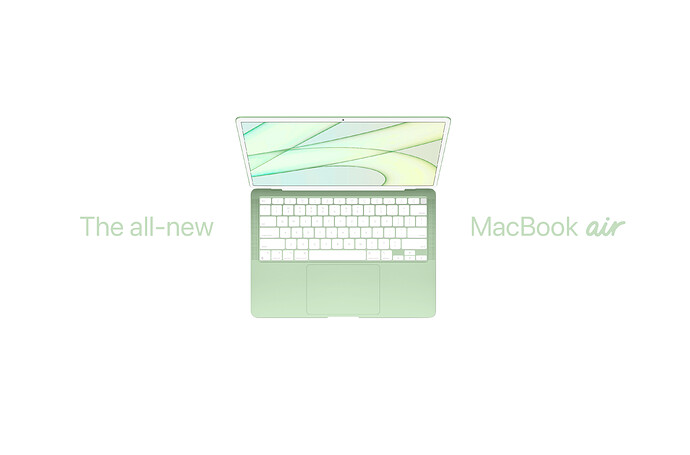 The M1 MacBook Air debuted almost a year ago at this point, in fall 2020, to much fanfare and a great critical reception. However, it appears customers will have to wait a while for the next big update. Analyst Ming-Chi Kuo says that the new MacBook...

I’m in the market for a new MacBook Pro or MacBook, and I’m hoping to have my socks knocked off by the March reveal.

An M1 Pro/Max MBP with a nice large monitor and hooked up to all your desktop goodies via a TB4 hub makes for a great desktop and of course it’s still an awesome notebook when you’re on the road. It’s not the cheapest solution, but it’s for sure the most versatile.

However, the high-end mini and iMac are both slated for updates in March and June so my advice to you for right now would be to wait until those releases have happened.

Can you move the file server duties to the Mini in the entertainment center? A JBOD Enclosure can store a massive amount of data. The 2014 Mini has USB3 which is usually fast enough for spinning drives.

As to the laptop/desktop decision, I just went the other way with a M1 iMac for home and keeping my 2015 MBA for travel. The Air was upgraded with a 1tb drive so I can take everything with me. Previously I had used a MBP then the Air attached to a Thunderbolt Display. Worked great when I was spending more time on the road.

Yes…the simplify option has a lot of advantages…that’s why ditching the iMac and doing all photo processing on the MBP with an external monitor is one alternative. None of this is a budgetary issue…I can afford to do whatever I want…up to and including replacing both the mini at the TV and the iMac with new hardware…but that goes against simplify. When I bought the M1 Pro MBP I deliberately got more RAM and drive than I thought I needed since none of it is upgradeable and I knew this further transition was down the line a bit. I’m tending currently to slightly favor the simplify approach and replace just the mini in the TV for file server services…but at this point haven’t really firmed anything up nor discussed the options with my spouse (although she will say we can afford it so do whatever I like since I’m the IT guy in the house) for her thoughts.

The upcoming M2 will be more powerful than the M1 obviously…whether that’s a little or a lot nobody really knows yet. However…it likely won’t be as powerful as the M1 Pro or Max is for multicore stuff and photo processing is definitely multicore stuff…and at this point the M1 Pro MBP is plenty fast enough for photo stuff that I do except for the display space. So upgrading the TV mini to an M1 Pro/Max version would work just fine…and at worst I can use it with the TV as monitor and a keyboard/mouse on my lap (although I would have to see what the actual screen resolution is…4K for our Sony 65 inch model vs the 5K of an iMac or LG monitor.

Concerning moving file server duties to the mini…yep…that’s the plan if I end up with the MBP as the sole photo processing machine…I’ll just move the OWC RAID and the 4 or 5 other drives having of of it to the new M1 Pro/Max mini that I’ll upgrade the entertainment center to…the only things I would have to sort out then are where to hook up the Fujitsu scanner and the printer…but those are easy. The scanner I’ll just leave by the monitor for the MBP an hook it up when needed…and the printer is on the network anyway although I would in that case probably move the old mini into the office for a print server so it’s available from iOS devices…it’s not new enough to have AirPrint in it but Printopia solves that problem nicely…and I can hide the old min on a shelf/bracet under the monitor table back in the office so it’s out of sight/out of mind.

I could easily move the drives from the server to the existing mini…but don’t see much advantages to that…even with slow USB A Seagate Backup+ drives it’s significantly slower disk performance than the same drives on the current Intel iMac and the mini drive speed is the limiting factor…not network throughput and that makes backups to it slower so the normal file server duties moved to it would overall slow things down.

Realistically…replacing both the mini and the iMac is a less likely alternative than the other ones. And also realistically other than being 8 years old and therefore slow when Screens 4 connects for management it’s not really being heavily taxed so if I went the M1 Pro/Max iMac then there’s no pressing need to do anything with it until it dies.

And I gotta admin…simplify has a lot of advantages. Having a single machine for travel and home with a larger display, scanner, and graphics tablet as well as a full size keyboard/mouse/trackpad with the addition of a single cable has a lot of things going for it. The only thing lost with that is that whatever drives are hanging off the TB hub would only be available if I walked back to the office and not when it’s on my lap.

I upgraded my MBP from my old 2015 rMBP and it was getting pretty slow…my wife’s M1 Air (which replaced a 2013 MBA) ran rings around the 2015 rMBP…and it was 6 years old…and darn it I wanted a new one anyway. Besides…the 14 inches is smaller and lighter and easier to carry on travels…we’re retired and it’s all personal travel anyway but photo processing is way more intense CPU/GPU wise than anything I ever did while I was work traveling…that was email and web and MS Office.

I’m not making any decisions until I see what happens in the near future…it seems like we’ll have a March event and we’ll see what comes.

If there’s a high end mini with something like Dual M1 Max chips which has also been bandied about…then perhaps having just the 4K TV monitor instead of a 5K external is an attractive alternative as well. I’m still cogitating on it waiting to see what happens…and as I said in my initial post I’m just looking for good ideas and smart opinions that I might not have thought of on my own.