I need an external SSD for my 2017 iMac. USB-C or Thunderbold 3 connection. I was looking at a recommended Samsung but people reported that it runs hot. Since this is connected to my iMac and will be on all of the time I would prefer a cooler drive. One that plugs into an outlet for power, as opposed to a laptop drive that draws its power from the computer, is fine. At least 1TB in size.

I have a LaCie 1 TB which runs from my CalDigit Thunderbolt dock.
Cool, quiet and works great.
David

I was looking at a recommended Samsung but people reported that it runs hot.

Which model was it?

I ended up buying a SanDisk 1TB Extreme PRO.

I have a Samsung T5 and a T7 now, and both are warm to the touch but not concerningly so.

Build your own. Less expensive and much easier to swap the drive without losing the bridge (or vice versa if ever there’s a problem with that).

This fast 1TB solution is $135 plus tax (includes cable and shipping though).

I’ve had good luck with products by Crucial.

Since making my purchase Steve Gibson has been discussing the results of a new test tool he developed as part of his work in updating SpinRite. He discovered that SSD performance often varies greatly between different regions of the same SSD. He found that Samsung SSDs were most uniform in providing the same high performance in all regions of their SSDs and suspects they are more reliable. So perhaps I should have gone with the T7.

I did look at Thunderbolt 3 SSDs. Very expensive.

I concur - building your own is pretty easy and the price is comparable to purpose-built external drives. And it lets you cherry-pick components. So you shop around for a high quality SSD and a reliable enclosure that has all the features you want (interfaces, cooling, size, looks, etc.)

The only thing to keep in mind is that a SATA-based SSD will be limited to SATA speeds. For SATA 3, you’re limited to 6 Gbit/s. This is faster than USB 3.0 speeds, but significantly slower than SSDs using other interfaces.

If higher performance is desired, you can get NVMe enclosures supporting USB 3.1 gen 2 (10 Gbit/s) or a more expensive NVMe Thunderbolt enclosure. Equip one with an NVMe M.2 SSD to create an external drive.

IMHO if you really want to exploit the potential of PCI SSDs (M.2 NVME) you need to go for a TB3 enclosure. Even Gen 2 doesn’t offer enough real-world throughput (at least for data I’ve seen on Macs) to justify going beyond SATA3.

Going TB3 + PCI SSD makes the solution more pricey (as your figures show), but if that extra performance is required it will be well worth it.

Going back 4 or 5 years when I started replacing spinning “rust” with SSDs I did a lot of reading. I found that anandtech.com has very good write ups about the nitty gritty details of SSDs. And they felt, with lots of backing and explinations, that Samsung seemed to be doing the best job of firmware inside of SSDs. Even back then a Samsung EVO or similar SSD had something like well over 300mb of code in the drive.

Anyway I’ve gone with almost all Samsung since then with only 2 failures over 200 or so drives.

And where budgets have been severly constrained I’ve gone with Crucial.

SSDs in a spinning disk case are all over. A current model Samsung EVO can be had for 1TB for $100. And as other have noted if you really want faster you can go with M.2 form factors (looks sort of like a memory stick).

And yes, get a good external case and have fun.

Samsung has a QVO line that uses a different way to structure the cells at the atomic level and gets the cost down. But it is specifically for rare write situations. Read speeds are decent but writes are very slow. Think things like a library of photos or similar.

Samsung also has their own external line of drives based on their EVO silicon which get good reviews.

I have a late 2015 iMac. I believe it has USB 3 and Thunderbolt ports. I’m guessing that the Nekteck enclosure you have suggested wouldn’t be compatible for my iMac. Do you have a suggestion for an enclosure that would be compatible?

The Samsung 1TB drive is currently on sale on Amazon for $110 and I thought I might use it to create a Big Sur startup disk.

Do you have a suggestion for an enclosure that would be compatible?

I’m not sure which Samsung 1TB drive you’re thinking of, but if it is one with a SATA interface, I would recommend using a Vantec NexStar series enclosure.

I’m currently using their NexStar TX 3.5" enclosure for three 4TB hard drives (one for Time Machine and two for backup/clones). They work great and are bootable on my 2018 Mac mini.

For an SSD, you would probably want a different model enclosure: one that supports 2.5" devices with a 10 Gbps USB interface. Probably one of these: NexStar GX USB 3.1 Gen 2 or NexStar SX. I haven’t personally used these two, but I have used many other NexStar enclosures in the past and they’ve always worked well for me.

Thanks for your suggestions and sorry for the confusion.

I was trying to reference a post from Simon suggesting the

but my iMac doesn’t have USB C so I was wondering what case would work with USB 3 or Thunderbolt.

I have a late 2015 iMac. I believe it has USB 3 and Thunderbolt ports. I’m guessing that the Nekteck enclosure you have suggested wouldn’t be compatible for my iMac. Do you have a suggestion for an enclosure that would be compatible?

The Samsung 1TB drive is currently on sale on Amazon for $110 and I thought I might use it to create a Big Sur startup disk.

You just need a cable that ends up with USB-A instead of -C. You don’t need a USB-C Mac to use USB-C peripherals. What you need is USB3 and your Mac has that via USB-A ports. Fortunately, plenty of enclosures come like that. 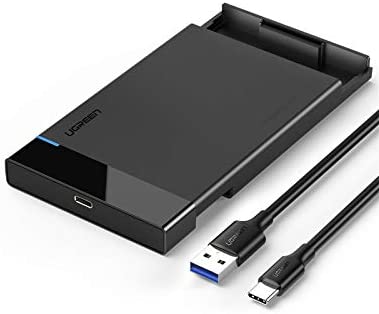 And of course you could even get one that comes with a cable with twin USB-C plugs and then just swap the cable or use a USB-C to USB-A adapter.

The Samsung 870 QVO 1TB by the way just today went on sale for $90. That’s the lowest price it’s ever been by quite a margin. I had to order one.

Is there such a thing as a Thunderbolt 2 to USB-C cable? When I search on Amazon or OWC, I get hits (many many on Amazon) but no result that I have found is Thunderbolt 2 to USB-C. (In case anyone is interested, there is an iMac with four occupied USB ports and two unoccupied Thunderbolt 2 ports, and I would like to add a USB-C external drive without getting a USB hub.) Thanks.

There’s TB3-TB2 adapters but that will only work if the peripheral is actually TB3. If it’s USB-C only, that adapter won’t help. You’ll probably need to get that USB hub.

Perfect. Thanks for your thoughtful and detailed reply.

Thanks, @Simon. I’ll suspend my search for a TB2 to USB-C adapter. But now I have another first world problem to live with.

For some reason, that reminds me of a signature I saw long ago: “I cried because I had no PowerMac, until I met a man who used Windows.” (Yeah, a long, long time ago.)