If you’re perturbed by Google’s tracking and profiling based on your searches, there’s a new alternative in town that doesn’t, like DuckDuckGo and Ecosia, rely on Microsoft Bing. The new Brave Search provides fully anonymous searches using an independent search index, though it also currently checks its results for quality against Google using anonymous queries.

In Safari, you can use Brave as a search engine using the ‘Quick Website Search’ feature. It takes a few extra keystrokes per search, but isn’t hard:

Search is hard; I switched my default engine to DuckDuckGo after one Google outrage, but frequently regret the lack of depth in its results, plus occasional inaccuracy. But Brave lacks the basic functionality of searching for a particular string: Using my own (obviously biased) litmus test, I noticed with considerable embarrassment that the 3rd hit for ““Flash Sheridan”” does not contain “Flash Sheridan”.

Interesting. I do see slightly different results when I search for “Flash Sheridan” as opposed to Flash Sheridan (no quotes). But you would seem to be the top hits for both, and the quoted version doesn’t seem to have anything unrelated to you on the first page. Clicking the Info button reveals that Brave Search did mix in 80% of the results from third parties, so I wonder if using quotes or more search terms causes Brave to rely more heavily on others. 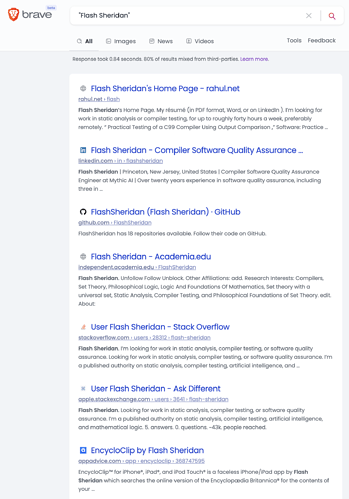 I see the same results.

Without quotes, the third link is an article about “Sheridan Smith”, where the word “flashing” appears in the headline. But I would expect that. Without quotes, it is searching for articles that contain the two words, not necessarily together or in that sequence.

With the quotes, then it should be searching for the phrase, and that is what I’m seeing.

Thank you for covering Brave Search!

However, I have to point out that your assertion that DuckDuckGo is a “Bing-driven search engine” is not exactly accurate. I’ve come across this incorrect assertion before and checked their website to find out whether it’s true. Bing is used as one source among many. Please take the time to read the Sources page at DuckDuckGo and follow its link to “over four hundred sources.” DuckDuckGo’s source list is quite long. They also have their own DuckDuckBot that crawls the web for further results.

When people search, we believe they're really looking for answers, as opposed to just links. For many categories of searches (restaurants, game of thrones, code documentation, etc.), there is usually a specialized search engine (e.g. Tripadvisor),...

IOW: Please stop spreading the incorrect meme that DuckDuckGo being just a mirror of Bing. It is not only Bing. IMHO DuckDuckGo is an excellent search engine that only gets better with time. I’ve happily been using it by default for years, foregoing Google except when I’m looking for contrasting results. I also keep on hand links to up and coming search engines from Quant and Startpage:

I have been using Startpage for many years (I’m surprised Adam didn’t mention it). It’s an anonymized way to use Google Search. And it’s not so much Google’s tracking that’s a problem, it’s that they use your history to “shape” search results. It’s one thing to be presumptuous about ads, quite another to be so about the search itself.

Another problem that I’ve increasingly noticed with Google (via Startpage) is censorship of results.

I’ve been using Brave Search for a few weeks now and have been impressed. By the way, it currently claims that 87% of its results globally are from its own index.

Startpage isn’t quite “up and coming” — I’ve been using it for many years. According to Wikipedia, it’s been around in its current form (mirroring Google) since 2009.

Please stop spreading the incorrect meme that DuckDuckGo being just a mirror of Bing.

I said nothing about it being a mirror of Bing. I said it was “based on Bing,” which as far as I’m aware is true, and is backed up by DuckDuckGo saying:

We also of course have more traditional links in the search results, which we also source from multiple partners, though most commonly from Bing (and none from Google).

I’ve used DuckDuckGo in the past, and as I said in the article, I don’t like its results. If it works for you, great—we probably search for different kinds of things.

I haven’t tried Startpage recently—I can’t remember what was off when I last used it.

Perhaps I can just add that you can use DDG and still access Google search results by appending !g to your DDG query.

Oh dear, the usual defensiveness of TidBITS makes one wary of pointing out its errors. But it’s nonetheless good to get people talking other than simply let errors pass by as fact. Therefore, I persist. And yes, I like it when others point out my own errors in order for me to learn, grow and other useful things. Gut me and I grow back better. Gut away.

Oh goodness, such a lot of fuss over an interpretation of a four-word parenthetical in a review of a different service.

And I get to watch. I’ve said everything I wanted and needed to say to TidBITS on this subject and wouldn’t change it.

DuckDuckGo search results have gotten better with time. I never use Google anymore, and I’ve often wondered what it was that Google users thought was better or more accurate. Oh well. To each his own, but in my opinion, Google represents a level of evil that Zuckerberg can only dream of. We may all be forced to interact with it at least indirectly, but we can choose to limit our support of their info scraping and marketing plans.

Without quotes, the third link is an article about “Sheridan Smith”, where the word “flashing” appears in the headline. …
With the quotes, then it should be searching for the phrase, and that is what I’m seeing.

Thank you, the “flashing knickers” result was what embarrassed me when ego-surfing myself in quotation marks. I used the Brave Feedback button right away; perhaps this is a good sign. (I’m so old, I actually got a personal response to pushing the Google Feedback button, when they stopped showing “No Results,” instead of non-matching results, when they had no matching results.)

Ain’t that the truth.

Another vote for Startpage, which I have used since its inception. I tried to love DuckDuckGo but Startpage/Google results are the best IMO.

Regarding Google. . . I have limited my exposure to Google since its search engine first appeared. (I’ve been active on the Internet since 1997.) I’ve done a variety of things, including using a personal VPN service for over 10 years. Since I have added mitigation measures over time as the degree of online tracking has increased, it has not been an onerous task. My Google account is configured to provide it as little personal info as is possible using the provided privacy options.

A couple of years ago I did an audit of all of the data Google had on me that is accessible via its online tools. The grand total was 1MB.

I still have a Google account so I can use a GMail account as a backup to my privacy-oriented email provider Runbox.com. (My local newspaper blocks the domain I use for my email addresses, so I use GMail for occasional Letters To The Editor. LOL) Soon I will set-up another emergency email account and then my Google account will be history.