Use HDMI ARC or eARC with your Apple TV 4K

With HDMI ARC or eARC turned on, your Apple TV 4K (2nd generation and later) can receive high-quality audio from a supported TV, then play that audio through your HomePod or HomePod mini speakers.

My understanding of this is that you can now run audio from your TV or other devices connected to other HDMI ports of your TV to HomePods or AirPods through an Apple TV. For this to work, your Apple TV would need to be connected to an HDMI port on the TV that supports ARC or eARC.

A bit of background from a layman who has recently modernized his home theater setup in his living room (me):

Normally HDMI is one-way connection transmitting video and audio from a source (streming device, Blu-ray player, cable box, etc.) to a TV. However, with moderately high-grade cables and connections to ports enabled for ARC (Audio Return Channel) or eARC (enhanced ARC), audio can be sent from the TV to the external device (usually an audio-video receiver (AVR) or sounder with the AVR then outputing the sound to its connected speakers. The difference between ARC and eARC is that eARC handles a greater variey of audio codecs.

So, this update enables newer Apple TV’s to take on the role of the AVR for audio devices that can connect to it.

Note [added after the inital post]: The support document only mentions HomePods, not AirPods. However, I see no reason why AirPods, added as temporary devices, would not work.

I applied the update to my HomePod Mini about 20 minutes ago , it appears to be still enabling the temperature sensor. When I ask Siri “What’s the temperature in here?” It replies “I’m still getting that set up Please try again in a few minutes.”

An hour later, it actually responed with the temperature information. When I asked about humidity, it also responded. I happen to have a cheap clock that shows room temperture and humidity within a foot of the HomePod. The numbers that Siri reported were within 2 units of the numbers on the clock.

I noticed my updating the homepod (1st gen) which is paired to another, one showed 16.3 while the other showed updating (16.2). I showed updating for atleast 25 mins… and until I backed out of the Home app and returned, I wasn’t sure it was complete. Took actually over 45 mins to update two Homepods (1st gen).
I tested my setting for living room lights (a WEMO plug) and Siri turned them on BUT without a verbal confirmation as it used to. This time, a dull tone, boop. I know this is stated in the notes but why does Apple change this without leaving previous option? Alteast my “Hey Siri, good night” setting has Siri turn off all the lights and say “Good night!”…

My Homepod Mini updated last night. With the Home app on my iPad I checked if the sensors (temperature & humidity) were displayed for the room but no sign of them. Then I realised that the iPad was on 16.2. After updating it to 16.3 the sensors appeared in the Home app: 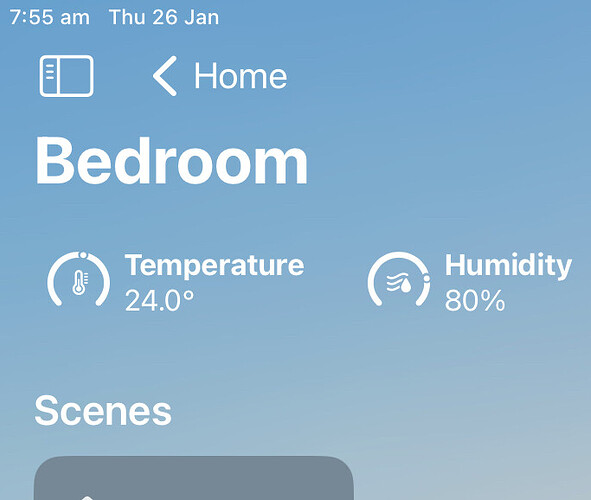 PS It’s mid-summer here in Sydney and we measure temperature in Celsius!

There is an issue with the Home app on both iOS 16.3 and iPadOS 16.3, sensor data from the HomePod mini don’t always show up but if you ask Siri, you get the information.