31 Years of TidBITS Keeping It Real

Congratulations Adam and Tonya, what an amazing feat to keep it going and keep it relevant over these 31 years. I also want to thank you for the terrific ride its been for me as a follower for 30 of those years. I still remember the excitement I felt that first year when each newsletter would arrive in my inbox. I was 21 (2 years younger than the 2 of you) and just starting my PhD. After reading one of your issues, I got the idea to network the Macs in my lab, as there were only 2 shared Macs for checking your email and printing. I ran the cheaper PhoneNET adapters and it was a revelation for everyone - you could print from your own machine and access the internet. How far we have come since then.

Has it really been so long? I started reading Tidbits while in either in my first or second year as a student at the British Columbia Institute of Technology in Vancouver back in 1991/1992.

Speaking of both Tristan’s upcoming schooling at SFU and Adam’s Internet Starter Kit For Mac, I bought my copy to make better use of one of my first internet providers, a dial up account at SFU.

It used to amaze me that I could use the university FTP server to download to my remote account (and then eventually transfer over to my 28k modem to my computer) at the unimaginable speeds of a small piece of their T3 connection (44.7 Mbps).

This morning it occurred to me that soon TidBITS will be older than me, since I’ve frozen my age at 32.

Congratulations to Tristan from a TidBITS reader in Vancouver. However, if he is to successfully find the SFU campus he should be aware that it is actually located in Burnaby, a suburb of Vancouver, and that from the Canadian viewpoint we are in the Pacific Southwest.

Hah, of course! Perhaps I should have used the term Cascadia instead.

It’s interesting how we tend to give intentionally broad descriptions when describing places. I know Simon Fraser is in Burnaby rather than Vancouver, but I didn’t even think about writing that, much as I said that we lived in Seattle, when in fact we lived in Redmond, Renton, and Issaquah, but never Seattle proper. I could have written “Burnaby, near Vancouver” or the “Seattle metro area” or the like, but I didn’t. I’ll have to think about why, and if that’s something I should be changing. (And this concludes your brief glimpse into the mind of an editor.)

Congratulations to Tristan! It’s been fun watching (internet wise) him grow up.

I first subscribed to TidBITS in September or October 1991, shortly after purchasing a Mac LC. I attended a meeting of the local Macintosh User Group (Le Club Macintosh de Montréal or LCMM), where TidBITS came highly recommended. I think the subscribing to TidBITS was perhaps the first thing I did with my LCCM e-mail account.

Thank you, Adam and Tonya, for your weekly email. I’ve been receiving TidBITS for many years now, and I look forward to my Tuesday morning hit!

Thanks much to Adam and Tonya, and the rest of TidBits gang. I am so glad you’re going strong these days.

I do not even remember how/where/when I first got turned on to TidBits, but I love it, and it is an important service for me, helping to ensure I maintain my Apple products appropriately. (also, my wife’s Apple products.) Plus, TidBits is entertaining, and keeps me up-to-date on the “Apple ecosystem”.

Congrats on 31 years, and thanks again !!

Congratulations Adam, Tonya, and Tristin! I’ve been a reader since around 1992 when I was co-managing four Mac computer labs as a student at the University of Wisconsin-Madison. The Macs were LocalTalk-connected for file sharing and printing, but weren’t even connected to the internet until my senior year. Later, I found my way online from home thanks to the guidance in the fabulous Internet Starter Kit, and was honored to author an article for TidBITS in 1996. Your commitment to quality, accuracy, and thoughtfulness is unmatched in the industry. Incidentally, I was at the MacWorld NYC 2001 ice cream social, and it was terrific fun.

Thanks for the kind words!

Congratulations to everyone at TidBITS for this major milestone.

According to an email in my archive titled, “Thanks for subscribing to TidBITS!” I became a reader on July 10, 2000, when I was still living in my native Germany.

The TidBITS-powered connection to the Apple motherland, as well as several attendances of the Netters Dinner solidified my long-time dream to one day live and work in the Bay Area. And lo and behold, that dream came true “just” 16 years later.

Better yet, one of the first dates with the wonderful woman who’s since become my wife, was at the 2008 Netters Dinner!

If this were any other publication, it’d feel very strange that it had such an impact on my life. Since it was TidBITS, though, I simply feel tremendous gratitude to Tonya, Adam, and everyone else who’s part of this endeavor, for not just providing great stories on all things Apple, but for creating a community of great people around the magazine.

And just for the fun of it, here’s a little pic of Adam — without the beard

— and Jeff Carlson from about a dozen years ago. 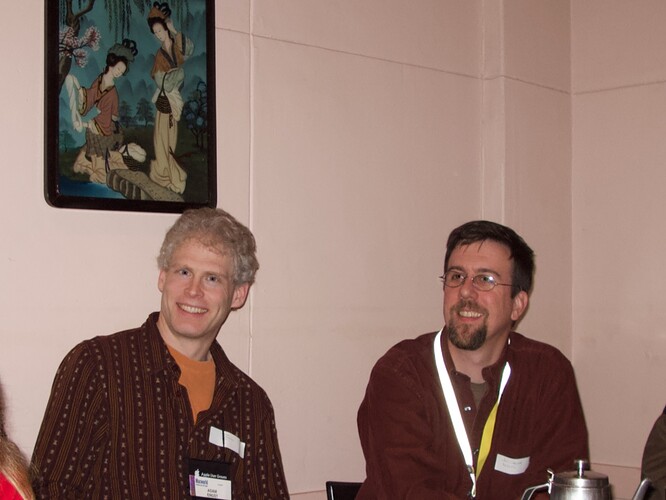 Hey, that’s very cool—I’m super pleased to hear that the Netters Dinner featured so prominently (and positively!) in your life. I must admit, I’d never heard of it being a dating opportunity before.

Thank you Adam, Tonya, Tristan and everyone who has contributed to TidBITS and the Take Control books over the decades. You have done fantastic work and been an important part of my life.